This Saturday, January 7, the Old Courthouse hosts the 1767 Twelfth Afternoon Ball, in which visitors will be transported back in time to Colonial America and celebrate the holiday season just how St. Louisans did in 1767. 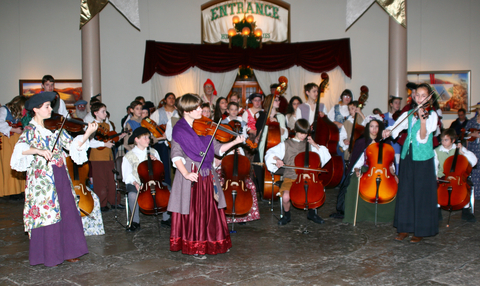 (You may be thinking, “Wait a minute, did St. Louis even exist then?” The answer is, simply, yes. In the midst of the American Revolution, St. Louis was established as a fur trading post by Pierre Laclede and his 13-year-old scout, Auguste Chouteau, in 1764.)

In traditional holiday celebrations of the mid-1700s, Christmas was the first day in a season of celebration that would last until the sixth day of January. And while the Christmas tree originated in the 16th century in Germany, it was not introduced to America until 1842. (A few things have, however, stayed the same for hundreds of years: Christmas carols, gift giving and feasting.)

The King’s Ball, Bals du Roi, took place on Twelfth Night, January 6, to mark the end of the holiday season and the beginning of Carnival – a Western Christian festival season that occurs before Lent. At the end of the night, a special cake containing a hidden bean was served to all the guests. The man who found it was pronounced king, and he would pick his queen to be crowned alongside him. The couple would then preside over the evening’s celebration, and would be responsible for hosting the next dance of the season. King’s Balls continued throughout Carnival season and finished with the Mardi Gras grand ball.

Now that you know how holidays were celebrated in the mid-18th century, join the National Park Service in celebrating the end of the holiday season just how St. Louisans did in 1767. Listen to 1767 music by Dennis Stroughmatt et L’Espirit Creole; learn the most popular dances of the period; and taste delicious treats common to St. Louis dinner tables during the 1767 holiday season. In traditional fashion, King Cake will be served to guests, and the king and queen of Mardi Gras will be crowned.

NOTE: Historic clothing is not required to participate.

Our National Park Service Ranger, Doug Harding, gives a detailed description of how Christmas was celebrated in St. Louis during this time period. Check it out, here.