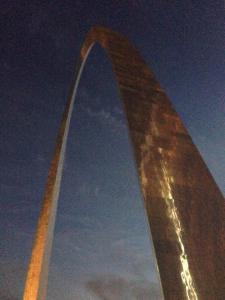 Arch Dims Its Lights for #EarthHour

It’s lights out for the Gateway Arch this Saturday, as the 630 ft. steel structure will turn off its non-essential lights for one hour at 8:30 pm local time in celebration of the World Wide Fund for Nature’s (WWF) Earth Hour, observed March 29 throughout the world.

WWF, formerly known as the World Wildlife Fund, launched the idea in 2007 to bring awareness to climate change by calling individuals, cities, landmarks to turn off unnecessary lights and electrical appliances in order to reduce wastage and overconsumption. Since then, the annual event has grown to include more than 150 countries and 7,000 towns and cities worldwide.

The event begins in Samoa in the South Pacific and ends in the Cook Islands. Are you in? Sign up for #EarthHour here.