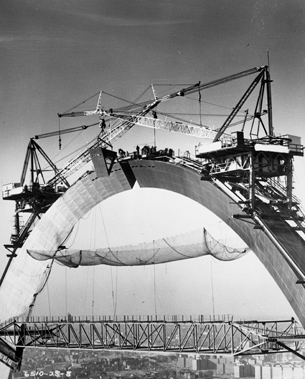 October 28, 1965, was a monumental day: The 10-ton keystone – or the final piece – of the Gateway Arch was put into place, marking the completion of the 630-foot tall symbol of St. Louis. The Gateway to the West has now towered over downtown St. Louis for the past 56 years.

When looking at the history of the Gateway Arch, there were determined people who were willing to wait, sometimes for decades, for funding and advancements in design and engineering. They created an icon.

St. Louis lawyer and self-described “do-gooder” Luther Ely Smith imagined an improved riverfront with a memorial honoring Thomas Jefferson and St. Louis’ role in the westward expansion of the United States. Smith worked with community and government leaders to approve funding for the project, and on December 21, 1935, President Franklin Delano Roosevelt signed an executive order creating Jefferson National Expansion Memorial, a unit of the National Park Service. Smith also oversaw the architectural competition of 1947, in which the world’s top architects submitted their designs for the memorial. The incredible arch design by Finnish-American architect Eero Saarinen was chosen on February 17, 1949. Saarinen did not live to see the Arch’s construction, however, as he passed away on September 1, 1961.

The Arch was built between 1963 and 1965, in a pre-OSHA era when workmen were not harnessed, and there was nothing but air between the Arch and the earth below. Amazingly, no one died or was seriously injured during the construction.

The Arch was constructed during an era of great change in America. While a space-age monument was built, discrimination existed in the building trades. In the summer of 1964, civil rights activist Percy Green led a protest, climbing the partially-completed Arch to call attention to unfair hiring practices. His protest resulted in some of the earliest actions by the federal government to enforce equal employment opportunities nationwide

On October 28, 1965, the final piece was put in place. When the Gateway Arch was completed, it stood as a symbol of our nation’s heritage, of innovation, determination and pride. It became the icon of our city, recognized worldwide. It is a tribute to those who built it – the steel workers, electricians, welders, engineers, crane operators and many more—without whom the Gateway Arch would not be possible.

In celebration of the Arch’s 56th anniversary, you have the opportunity to meet history! On Saturday, October 23 & Thursday, October 28, the National Park Service will host its annual Meet the Builders reunion to honor the engineers, tradesmen and support staff who contributed to the construction of the Gateway Arch from 1963 to 1965.

At the events, a small group of the builders will share memories, private memorabilia and photographs with attendees, and sign autographs. Meet the Builders is free and open to the public, and will be held in the Arch’s tram lobby (on the lower level of the facility) from 10:00 a.m. to noon on both days. The Arch Store, located in the tram lobby, will sell $1 commemorative posters for autographing.

In addition to the builders’ events, on October 23 & 28 the National Park Service will share construction-era photos on the big screens in the “Heading West” exhibit gallery.

Other Ways to Celebrate the Anniversary

There are additional ways you can mark the 56th anniversary of the Arch while you’re visiting the Arch: Take the Tram Ride to the Top to see the views of downtown St. Louis and the Mississippi River from 630 feet in the sky. Step into the shoes of the builders as you look out the windows and see the bustling city and the currents of the Mighty Mississippi below. You can purchase tickets to the Tram Ride to the Top online via the Arch’s webstore.

Before or after meeting the builders, watch the award-winning documentary movie Monument to the Dream, which chronicles the construction of the Arch and screens daily in the Tucker Theater. Learn about the inspiration behind Saarinen’s timeless design and see the determination of the builders as they piece together the monument. You can purchase tickets to the movie online via the Arch’s webstore.

Stop by The Arch Store, located on the lower level of the Arch facility, to pick up Arch apparel, souvenirs and other gifts. The Arch Store will offer special pricing on select Arch- and construction-related items on October 23 & 28.