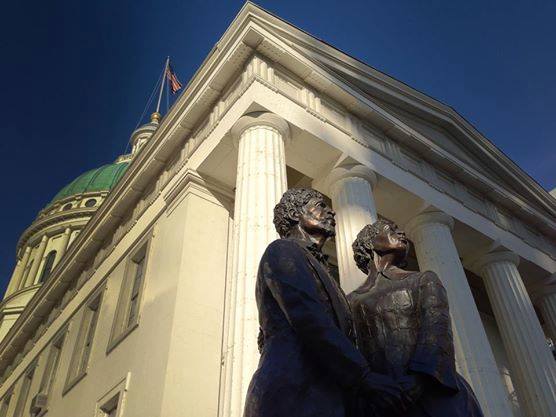 In honor of African-American Heritage Month, the Old Courthouse will host free programs and events on weekends throughout February, including live music, mock trials, painting workshops and more! Inquire about any of these events with the ranger stationed at the Information Desk in the Rotunda (the OCH is located at 11 North 4th Street, St. Louis, MO 63102), or by calling 877-982-1410.

Featuring vocalist Technical Sergeant Keisha Gwin, the seven-piece group of talented musicians will perform in the Old Courthouse Rotunda. The Starlifter Band has deployed and played around the world and will be performing jazz standards from Gershwin to Stevie Wonder.

Create art while discovering the history of the Dred Scott Decision – one of the most important cases ever tried in the United States (the case was heard in our very own Old Courthouse) and one that hastened the start of the Civil War. Visitors will work with a park ranger, who is also a professional artist, to paint an oil portrait of Dred Scott, based on one of the few surviving images of Mr. Scott from the period.  Art supplies are provided.

The Roots of Jazz

Visitors will join Park Ranger Steve Frioux to learn about American Jazz and its evolution from African roots.  During this interactive program, Ranger Frioux, who retired from a career leading the U.S. Air Force Band, will use the trombone and clave, an Afro-Cuban percussion instrument, to demonstrate musical styles throughout history.

Reenactment of the Dred and Harriet Scott Case

Saturdays and Sundays throughout February; 2 p.m.

The enslaved Scott family, including Dred, Harriet, and their daughters, sued for their freedom from slavery prior to the Civil War. In one of the OCH’s restored courtrooms, rangers will facilitate a mock trial, during which participants will read printed scripts, taking on the roles of the people involved in Mr. and Mrs. Scott’s 1850 trial, such as the bailiff and jury members.