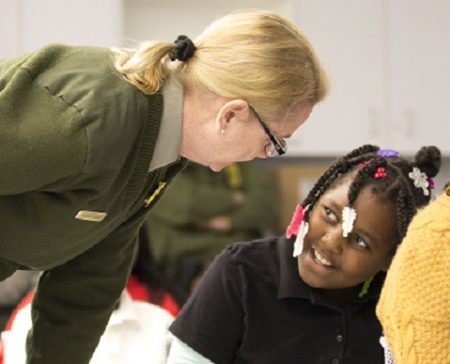 Gateway Arch National Park is honoring 18th-, 19th– and 20th-century women of Missouri and the West and their successes and struggles with “Strong Women and Compassionate Hearts,” a special series Saturdays in March.

All programs are free and open to the public and will take place in the Education Classroom located on the lower level of the Gateway Arch Visitor Center. We hope you can join us!

We all have heard of famous women who fought for civil rights or who made significant contributions to the history of our nation. But there are many women who made equally important contributions and are less well known. Lynne Jackson, president of the Dred Scott Heritage Foundation, will lead interactive activities that celebrate these exceptional women, past and present.

Ste. Genevieve, a French-Creole settlement founded in the early 1700s, is an intriguing but not particularly well known part of Missouri history. Discover the various roles women and girls from different backgrounds and socioeconomic levels filled daily that were vital to their families and their community. This program is also offered on Friday, March 22, at the Center for French Colonial Life in Ste. Genevieve.

Cult of True Womanhood: Saturday, March 23; 1-3:30 p.m.
Thousands of women made the journey West, and while some lived their lives according to the social norms expected of them, others challenged them. Ranger Karen Stoeber explores the cultural norms of the mid-1800s as well as the “cult of true womanhood,” and highlights several women who stepped out of their expected roles in order to survive during this often tough and dangerous era.