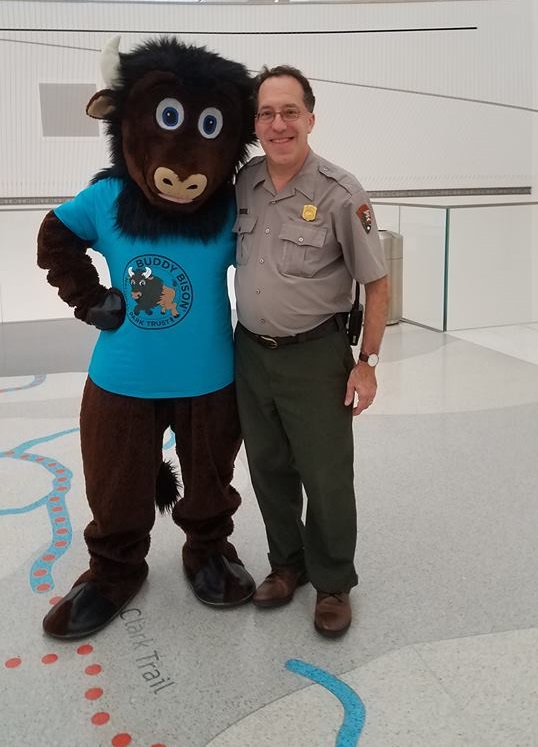 In our “Humans of the Gateway Arch” series, we spotlight a member of the Gateway Arch team who helps make the Arch one of the premier travel destinations in the world. The Arch’s park partners work together to attract and welcome visitors to St. Louis’ renovated urban national park, where visitors can create lasting memories and learn about American history.

Meet Richard Fefferman, a park ranger with the Division of Interpretation at Gateway Arch National Park.

How long have you been a park ranger at Gateway Arch National Park?

I have been a ranger at Gateway Arch National Park for over 30 years. I was first hired as a seasonal park ranger to handle the large crowds and extended hours the park handles in the summer. I enjoyed it very much and was lucky enough to be offered a permanent job with the park. The rest is history!

What does a “normal” day at work look like for you?

The main responsibility of my role is to tell the story and meaning of the park to visitors at the Gateway Arch and the Old Courthouse, but each day is very different. Oftentimes, I interact with visitors in the museums at the Arch and Old Courthouse or at the Top of the Arch, but sometimes I give directions at the information desk, or do tours for school groups and the general public at both of our sites. We even have programming on the Riverboats at the Gateway Arch. My favorite part of the job is definitely giving tours and hosting programs.

Do you have a favorite memory from your time working at Gateway Arch National Park?

Many years ago, after the Arch’s Visitor Center had closed for the day, I was doing an outdoor program called, “Ghosts of the Arch Grounds,” which talks about the history of the area. I was forced to move the group under cover of the North Leg due to a sudden thunderstorm. Unbeknownst to me, park maintenance had turned off power inside the Visitor Center. The guests on my “ghost” tour saw these dark shapes walking around the darkened lobby behind me, dimly lit by flashlights, while I told the ghost stories of downtown St. Louis.

What is a fun fact about the Arch that people may not know?

Gateway Arch National park hosts a program called “Gateway to the Stars,” in which we present telescope viewings at the park during warm weather months, preceded by a guest speaker on stargazing, light pollution, nature, or the history of the area. This year, our star programs have been presented online in a virtual fashion. On August 22 at 8:00 p.m., Washington University Scientist Jeff Gillis-Davis will be talking about the legacy of the Apollo missions followed by a virtual stargazing at the Gateway Arch. The program will be streamed via Facebook Live at www.facebook.com/stlastro.