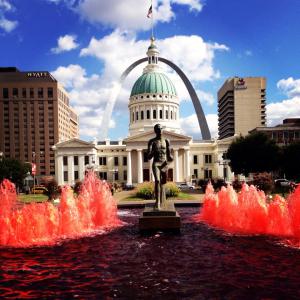 Do you hear that? The infamous batter-up tune, the loud cheers of the crowd, the click of the bat, and the roar of the stadium as the high fly ball soars over the left-field fence for a home run

This Monday, April 7, the Cardinals host the Cincinnati Reds in the Cardinals’ 2014 home opener. That means in just a few short days, downtown St. Louis will once again be a sea of red, filled with Cardinal Nation devotees who are more than ready to get the first homestand of the season started and once again chase that coveted ring.

If you’re heading downtown for the game, or just looking take in the energy and sights of the day, here’s our list of a few STL things to do downtown on Opening Day:

Tram Ride to the Top of the Arch: The Arch opens at 9am, so start the day off right by donning your best Cardinals gear and heading down to the Gateway to the West! The view of Busch Stadium from the top of the Gateway Arch can’t be beat!

Cardinals Hall of Fame and Museum Grand Opening: Beginning at 10am, check out the grand opening festivities of the Cards’ own HOF and museum at Ballpark Village, which features one of the largest collections of artifacts in all of Major League Baseball.

Opening Day Pep Rally: Join your fellow Cards fans for a pre-game party like no other! From 11am to 2pm, get in the Cardinals spirit at Ballpark Village with Fredbird, live music and appearances by former Cardinals.

Riverboat Sightseeing Cruise: Who doesn’t love sweeping views of downtown St. Louis on one of the best days of the year? At noon and 1:30 pm, the Gateway Arch Riverboats take off for one-hour narrated sightseeing cruises. Get your tickets today at http://ticketsforthearch.com.

Watch the Game: If you don’t have a ticket inside Busch, plenty of downtown establishments will be showing the opener. Check out the action at Ballpark Village’s indoor and outdoor screens, or catch the Busch view from high in the St. Louis Sky at 360, located on the top floor of the Ballpark Hilton.