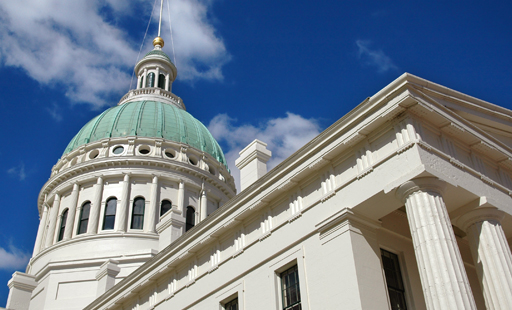 Changes are Coming to the Old Courthouse!

The renovations are part of the final component of the $380-million CityArchRiver project, which has resulted in the revitalization of the Gateway Arch park grounds, Arch Visitor Center, Museum at the Gateway Arch, St. Louis Riverfront, Luther Ely Smith Square and Kiener Plaza. The CityArchRiver project is the largest public-private partnership in the history of the National Park Service.

A project jointly funded by the National Park Service and Gateway Arch Park Foundation, this will be only the second significant renovation to the Old Courthouse since it was built between 1839 and 1862 (the original building was expanded during this time). The renovations include:

The Old Courthouse has served as the backdrop for some of America’s pivotal early legal cases: It was where Dred and Harriet Scott sued for freedom, beginning in 1846, and where the case’s lower court trials were heard in 1847 and 1850. While the Scotts’ case looms large in the history of the Old Courthouse, St. Louis Circuit Court records show that more than 300 other “freedom suits” were filed there by 1860. In another famous civil rights case, Virginia Minor sued for her, and by extension all women’s, right to vote in the 1870s.