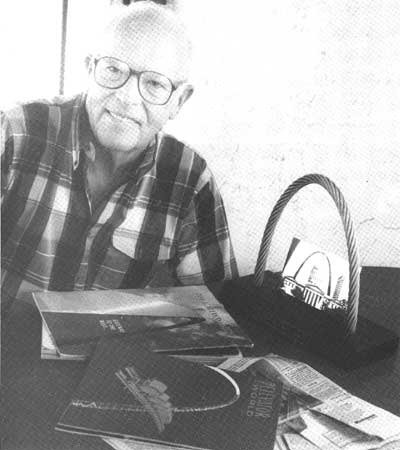 The Invention of the Tram Ride to the Top

What do you get when you combine the engineering of an elevator and Ferris Wheel? The Gateway Arch’s Tram Ride to the Top, one of the most unique experiences in the world. There is truly nothing else like it.

Did you know the inventor of the tram ride, second-generation elevator man (and college dropout!) Dick Bowser, had only two weeks to create the design?

Here’s how it happened: Bowser and his father had developed, manufactured and installed Bowser Parking System elevator equipment. According to Bowser himself, these elevators could travel horizontally and diagonally through a structure as well as the normal vertical travel. By luck, Bowser was visiting a friend at the Montgomery Elevator Company offices in Moline, Illinois, one day in 1960. The company had just been contacted by Gateway Arch architect Eero Saarinen’s office. They were looking for a firm to take on a “transporter” project for the Arch. The friend was aware of Bowser’s skill within the elevator realm, and knew he was the right guy for the project.

A month (and more back and forths) later, Saarinen requested a presentation from Bowser — and they needed it within two weeks. The task? They wanted to build an elevator of sorts to transport visitors to the top of the Arch. As far as criteria goes, the design could not impact the exterior of the Arch, and it had to transport up to 11,000 people in a 14-hour day.

After much planning and thought, Bowser knew a standard elevator, escalator or even a Ferris Wheel type was not going to work. But a combination of elevator and Ferris Wheel principles, he deemed, would be the solution.

Two weeks later, Bowser presented his concept of the tram ride to Saarinen and his team, as well as St. Louis congressmen, the mayors of St. Louis and East St. Louis, the director of the National Park Service and many others. He nailed the presentation. A few weeks later, he was under contract to design the Tram Ride to the Top. The project took six years and was completed in 1967.

What makes the tram ride so unique? You could say the eight tram cars (or “pods” as some visitors refer them to) that can hold up to five visitors at a time are unique in themselves. But a defining feature of the ride is the series of clicks visitors hear as they ride to the top. The clicks are the cars rotating along the track. The rotation allows the cars (and visitors inside) to remain level the entire way to the top.

The next time you take a Tram Ride to the Top, take a moment to appreciate Bowser’s innovative vision and creativity, and be inspired by his sheer determination in inventing this modern transportation system.

Image of Dick Bowser courtesy of the National Park Service