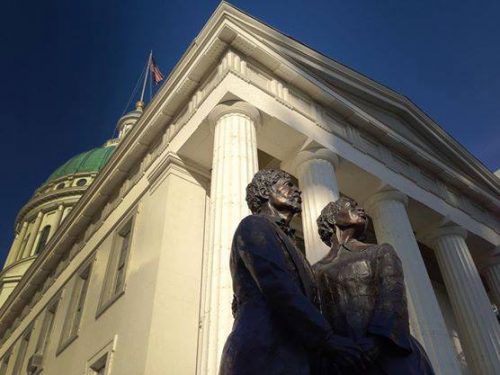 The Scotts’ Suit for Freedom

Looking west out of the windows of the Arch observation deck to St. Louis below, its hard to miss the green dome of the Old Courthouse, which stands out among the towering downtown skyscrapers. This historic courthouse, part of Gateway Arch National Park, is not only one of St. Louis’ most prominent architectural landmarks; it has also served as the backdrop for one of the most important cases ever tried in the United States: enslaved person Dred Scott’s suit for freedom, launched in 1846.

According to the National Park Service: On April 6th, 1846, Dred Scott and his wife Harriet filed suit against owner Irene Emerson for their freedom. For almost nine years, Scott had lived in free territories, yet made no attempt to end his servitude. It is not known for sure why he chose this particular time for the suit, although historians have considered three possibilities: He may have been dissatisfied with being hired out; Mrs. Emerson might have been planning to sell him; or he may have offered to buy his own freedom and been refused.

It is known that the suit was not brought for political reasons. It is thought that friends in St. Louis who opposed slavery had encouraged Scott to sue for his freedom on the grounds that he had once lived in a free territory. In the past, Missouri courts supported the doctrine of “once free, always free.” Dred Scott could not read or write and had no money. He needed help with his suit. John Anderson, the Scotts’ minister, may have been influential in their decision to sue, and the Blow family, Dred’s original owners, backed him financially. The support of such friends helped the Scotts through nearly eleven years of complex and often disappointing litigation.

In 1850, Dred and Harriet were granted their freedom by the Circuit Court of St. Louis County. After many appeals, however, the case was decided upon by the Supreme Court on March 6, 1857. The decision stated that slaves were property, and as such, had no right to sue. This decision hastened the start of the Civil War.

Today, the National Park Service hosts programming and mock trials to educate the public on the significance of the Dred Scott Decision and how it changed the course of history.

Click here to watch a short video that re-enacts a hypothetical conversation in which Dred and Harriet Scott discus the risks to their family if they sue their enslaver for their freedom at the Old Courthouse…and those they face if they don’t.